Have questions about our Animal Science Weekend? Contact our front office.

The Animal Science Weekend provides an opportunity for alumni to meet with old friends, as well as current faculty and students, and to see the new developments happening at OSU.

Animal Science Weekend as we know it today is a combination of several events: the Animal Science Alumni Association Gala Reunion, Animal and Food Sciences Banquet, and Cowboy Classic Sale.

The OSU Animal Science Weekend has become an annual event full of fun activities, recognition of accomplishments and old friends. Each event has a unique purpose and there have been meaningful changes in each over time, but how did this tradition begin? 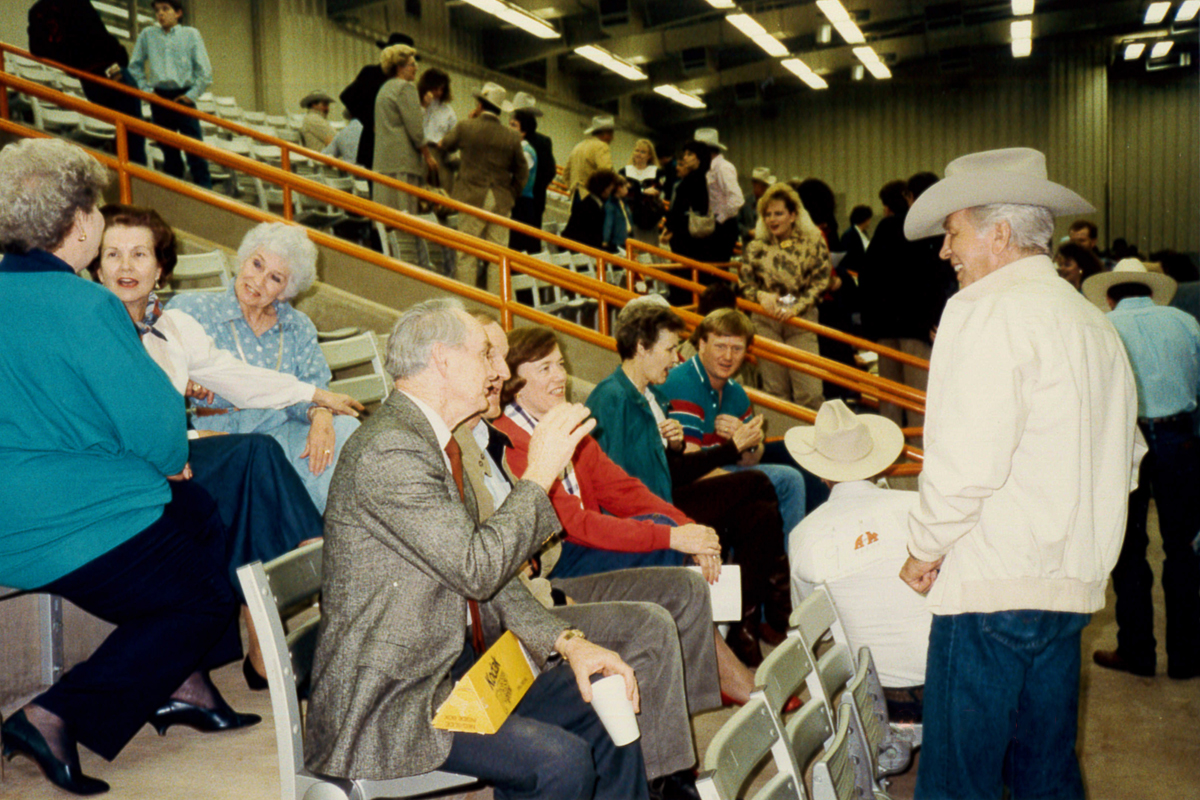 Prior to the Animal Science banquet, the College of Ag held a combined departmental banquet. Animal Husbandry, Dairy, and Poultry were originally three separate departments that were combined in 1967. Dr. J.C. Hillier was the first department head of the combined unit.

The department held a separate luncheon at homecoming each year, which was served at noon in the old meat lab for alumni, faculty, and students. A short program was held during the luncheon to recognize the judging teams.

Animal Science Weekend started when Dr. Hillier decided the department should host its own banquet each spring in order to recognize graduating seniors, scholarship recipients, advanced degree graduates, industry stake holders, judging teams, and excellence of faculty members and alumni within the department.

In 1979, the department started the Cowboy Classic, which is the Purebred Beef Cattle Center’s annual sale. The Purebred Beef Center employs OSU students to produce, promote, and merchandise the high quality seedstockfor the sale.

The Animal Science Alumni Association (ASAA) was started in 1982 by Dr. Lowell Walters. George Clift, a highly successful ranch real estate broker in Texas, was  the first president. The initial purpose of the Alumni Association was to assist in generating scholarship support for our students. That same year, the new Animal Science Building was completed and dedicated. All of the department's faculty members were housed under the same roof for the first time.

The ASAA initiated the auctioning of arena chairs to provide support for scholarships, aid students with expenses, and to create endowments in the OSU Foundation to help further support students in these areas in the future. This  was the beginning of the Scholarship Auction, which gives alumni the opportunity to contribute to the scholarship fund in an effort to help support students. Each year, an annual auction was held after lunch at the Old Timer’s Judging Contest.

The Animal Science Arena, now known as the Totusek Arena,  was completed in 1987. That year, the No. 1 brick from the old Animal Husbandry building was sold to Ben and Alma Grant for $2,000. They returned the brick to the Alumni Association to be resold each year as a symbol of unity and effort of the Alumni Association to give something back. The brick is kept in a special display (provided by Mrs. L.V. Singletary) in the Animal Science Building.

The Animal Science Arena was dedicated in 1988 during Animal Science Weekend. The first Friday night events were held during this special weekend. At 7:00 p.m., alumni participated in the Ranch Roundup.

“Cowboys would show their skills and compete like a rodeo,” said Connie Walker, former animal science secretary, of the Ranch Roundup.

The Western Dance was held at 9:00 p.m. and music was played by former members of Bob Wills’ Texas Playboys. The department put plywood down over part of the new arena dirt floor to create a surface for dancing.

“Dr. Tot loved to dance,” said Connie. “Dr. Totusek was responsible for the beginning of most of Animal Science Weekend. He loved getting alumni together.  We wrote millions of letters!”

In the fall of 2002, Dr. Robert Totusek, Dr. Joe Hughes, and Wayne Shearhart met to discuss the future of the Old Timer’s Judging Contest. Attendance for the event had dwindled and the department was strongly considering canceling the contest.

Wayne Shearhart suggested that a judging team reunion and dinner be held the Friday night before the Old Timer’s  Contest. Wayne offered to make a trophy of five carved animals and sixteen spaces for each year’s winners, creating a permanent and undisputable record of the winners that could be displayed.

After Dr. Totusek and Dr. Hughes discussed the event in more detail and created an alumni mailing list, Dr. Totusek called Wayne and told him to get his knife sharp and get to work on that trophy, because they were going to have the Old Timer’s Judging Contest on the first Saturday in April. The first judging team reunion was held in the banquet room of the old Ramada Inn, which could seat up to 206 people.

“We had no idea how many people would show up,” said Wayne Shearhart, “but we made a lot of personal contacts by phone and letters.”

In all, 354 alumni and spouses arrived to attend the first judging team reunion. It was clear that alumni wanted an opportunity to get together. There wasn’t quite enough food prepared, but it didn’t seem to effect the good mood of the event. Some attendees decided to make do with deviled eggs from the bar. The 50th anniversary judging team, the judging team with the most present, the oldest member present, and the member who traveled the furthest were recognized at the event.

A total of 132 alumni registered for the Judging Contest that Saturday. The 1953 judging team (the 50 year team) fittingly won the event and received the first place plaque on the trophy. Team members of the 1953 judging team include: Gene Kuykendall, Leon Freeze (high individual), Ron Blackwell and Audie Rackley.  Like in the years before, the annual auction was held after lunch at the Old Timer’s Judging Contest at the Animal Science Arena.

“The 2004 reunion was held at the same motel, Ramada Inn,” said Wayne Shearhart. “This time, the RSVP worked.  The motel set up tables in their lobby and almost everyone sat at a table. We had 492 alumni present.  In addition to the recognition, we held the auction at the motel after the recognitions. We raised around $12,000 that night. We had a large turnout for the Old Timers Judging Contest also.”

The Old Timer’s Judging Reunion was a success, but some of the graduates who weren’t on judging teams wanted to be able to meet as well. In 2005, all Animal Science graduates were included in the reunion for the first time. At that time, Gallagher-Iba had been expanded so Dr. Totusek arranged a tour of the facility, as well as the new suites in the Pickens football stadium.

“After the tours, we went to the O-Club in Gallagher-Iba and ate prime rib prepared by Dr. Brad Morgan and his crew,” recalled Wayne Shearhart. “It was delicious and the best meal the alumni ever had at the reunions up to that point.”

Having outgrown all previous meeting places, the 2006 reunion was moved to the Wes Watkins Center and renamed the Animal Science Gala. This was the first year the silent auction was held. Both the live and silent auctions were a great success that year and raised several thousand dollars for judging team scholarships. Money was also raised to honor Dr. Totusek with an Endowed Chair.

Dr. Don Wagner, former OSU Animal Science Department Head, said “In my view, the various activities help to cultivate, facilitate and continually advance and nurture the rich departmental culture established over many years by many forward thinking people who cared (and care) deeply about a truly wonderful department.

For one weekend a year, Animal Science alumni take a moment to recognize graduates and judging teams of the past, support graduates of the future, and honor those who have meant so much to many of us. A tradition that never lets us say good bye, but instead, 'Until next time.'