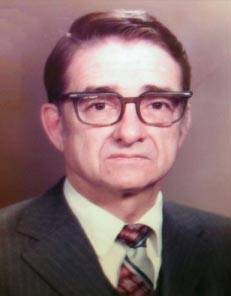 Kary Cadmus (K.C.) Emerson was born in Sasakwa, Oklahoma, on March 13, 1918. His university education includes three degrees from Oklahoma State; BS (1939), MS (1940), and Ph.D. (1949).  His collection and scientific library were given to Oklahoma State University in 1970 and they are now part of The K.C. Emerson Entomology Museum.

As a biologist, his early interest was in medical and veterinary entomology, which he studied under Lloyd E. Rozeboom and Darrel E. Howell. K.C. concentrated on the taxonomy, ecology, and distribution of ectoparasites, especially the chewing and sucking lice (Phthiraptera). He studied collections at the British Museums in London and Tring, the California Academy of Science, Stanford University, University of California (Berkeley), University of Kansas, the U.S. National Museum, and smaller collections in Formosa, Germany, the Philippines, and several other universities in the U.S.

When he started his research on chewing lice, their taxonomy was in a chaotic state. He worked with Theresa Clay and G.H.E. Hopkins on the preparation and publication of their checklist, which did much to put taxonomy of this group of ectoparasites on a firm scientific basis. He later published checklists of North American Mallophaga. In nearly 45 years of active research, he published more than 180 scientific books and articles in the U.S., Canada, India, Australia, South Africa, Denmark, Thailand, and England. He described 1 new family, 11 new genera and subgenera, and over 200 new species and subspecies of lice. Over 25 taxa of insects have been named in his honor. He served on the Council of the Biological Society of Washington. After his arrival in Washington D.C. in 1959, he was appointed Collaborator with the Department of Agriculture and Research Associate with the U.S. National Museum. During his tenure in those positions, he rearranged the chewing and sucking louse collections, greatly enlarging both, and made identifications for both organizations.

K.C. also served as an infantry officer during World War II. During that time, he served in the Philippines, was captured by the Japanese Army, made the Bataan Death March, and spent several years in prisoner-of-war camps in the Philippines, Formosa, and Japan. He received numerous awards from Philippine, Korean, and U.S. Army officials for his outstanding service.

Checklists of Spiders, Mites, and Insects of Oklahoma

The following publications by K.C. Emerson may be downloaded in Adobe PDF format. They may be used for non-commercial purposes and were scanned and posted with the permission of Mary Emerson. Many thanks to Robert Dalgleish for his efforts to get these books on the web! We apologize for any errors that may have been missed in the process.